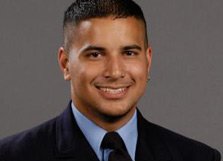 Kevin was the type of person who walked into a room and it lit up. He commanded the attention of all around him with his quick wit, his charm and his smile. Kevin had the personality that put people at ease – whether they knew him for ten years or ten minutes. He loved to tell elaborate stories about the adventures that he had each and every day, because Kevin turned everything into an adventure. So he’d sit you down and describe his ridiculous day and by the end of the story, you’d both be laughing with tears running down your face and realized that you had just made a new best friend.

Kevin started his emergency services career at the age of 16, when most his age are more concerned with videogames, Kevin chose to devote his free time helping his community of Union, NJ. He joined the Union Emergency Medical Unit and that started his passion for helping others. After Kevin graduated high school, he moved to New Brunswick and started his college education at Rutgers University studying Criminal Justice. While at Rutgers University he took the job as per diem Emergency Medical Technician. Kevin then decided that he wanted to expand his knowledge of emergency services. So he joined the East Franklin Volunteer Fire Company. Kevin went to fire school, where he obtained his Firefighter 1 certification. Kevin quickly made friends in the firehouse and went to as many fires as he could, to gain more experience. He even became part of a small group that would stay at the firehouse all night, just so that if there were a call an engine could be on the road as quick as possible. In 2006, he was recognized for his efforts and was promoted to Foreman. Kevin also was a certified CPR instructor and enjoyed teaching people how they too can save lives. Kevin actively participated in anything that would benefit the community. Emergency Services was Kevin’s passion and what he devoted his life to. After college, Kevin was thinking about becoming a New York City police officer. He had already taken the exam and was awaiting the results of his test.

Unfortunately, he died in the line of duty on April 11, 2006, while attempting to rescue a trapped resident from her burning home. Kevin’s test results came that same day that he died. He had achieved almost a perfect score on the written exam – a 99.6.

Kevin left a legacy with all those he touched. He taught us the importance of volunteering, the importance of family and friends. He was a talented, passionate and selfless young man. We are all blessed to have known him.

Please also visit our Video and Audio areas on this website to see and hear tributes to Kevin.To view the NY Times article on Kevin\’s passing please cut and paste the following link into your browser: