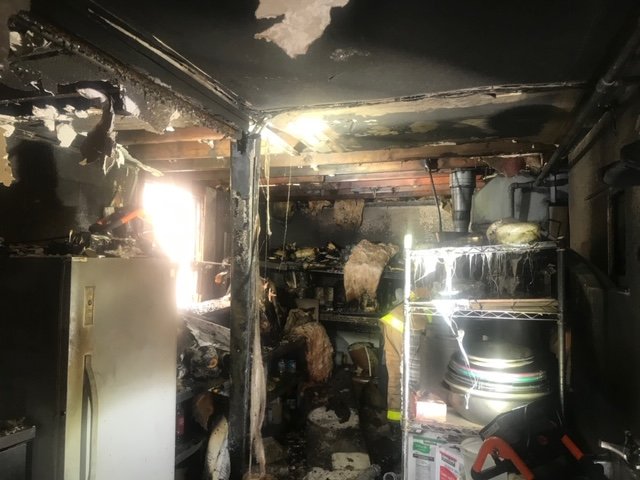 On Tuesday, June 2nd, 2020 at approximately 1053 hours, Franklin Twp. Fire District #3 was dispatched to 619 Somerset Street for a possible Structure Fire.
Engine 253 and Ladder 25 arrived together 1st due, confirmed smoke showing at the rear of the building, and a working fire. The incident location was updated to Sunny’s Seafood (625 Somerset Street). A 1st alarm was requested.
Chief 25 arrived and took command of the incident. Chief 27 arrived and took the role of Interior. The interior crews deployed an attack line off Engine 253 and located a working fire on the B/C corner of the Structure. Ladder 27 arrived and deployed a 2nd attack line to back-up the initial interior crews and entered inside to assist with the operation.
After approximately 30 minutes, the fire was placed under control. Interior Crews then checked for fire extension and performed overhaul.
The fire was held to the B/C corner of the structure, with no extension. Additional units on-scene from the 1st Alarm were Somerset Fire and Rescue as R.I.T., New Brunswick Engine Co. #5, Ladder Co. #1, North Brunswick Co. #3.
Additional Fire District #3 units on-scene were Car 272, Car 274, Squad 27, Safety 27, Car 25 and Tech Rescue 257. Traffic Control was provided by Franklin Police Department and New Brunswick Police Department, as the incident was on the border of both jurisdictions on State Route 27. Robert Wood Johnson EMS stood by on-scene and was cleared without incident.
Total operational time was approximately 1 hour and 15 minutes, with complete extinguishment of the fire. The incident investigation was performed by Franklin Twp. Fire Prevention and the details are pending at this time.
Thank you to the Mutual-Aid companies who assisted on the scene.