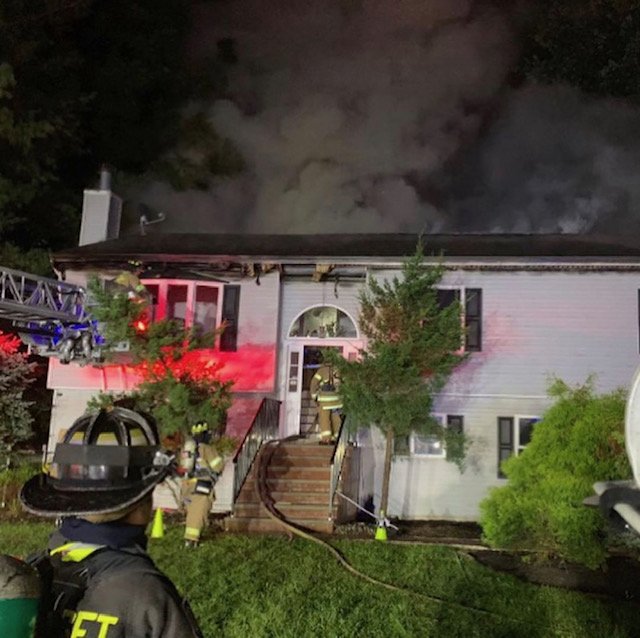 On Wednesday August 28th, 2019 at 0313 hours, Fire District #3 was dispatched to the area of West Point Avenue at Berger Street, for a reported Structure Fire.
While Car 27 was enroute to the scene, he observed a large black column of smoke and requested a re-tone for Station 25 and Station 27, confirming a working Structure Fire. Upon arrival, Car 27 established command and confirmed the address of the Fire was 409 West Point Avenue.
While Car 27 performed a 360 of the building, he observed the residence appeared to be over 50% involved and fire had engulfed the 2nd Floor and was extending into the attic space from the rear. He requested a 2nd Alarm, which brought New Brunswick Ladder Co. #1 and Engine Co. #5 to the scene, as well as North Brunswick Co. #3 and Somerset Fire and Rescue. for the R.I.T.
Squad 27 arrived 1st Due and laid their own supply line from the hydrant. The crew from Squad 27 then pulled an attack line to the rear of the building. Ladder 27 arrived shortly behind the Squad and brought a 2nd attack line through the front of the building, with the assistance of Ladder 25’s crew. A 3rd attack line was pulled by the remainder of the crew from Squad 27 and Engine 253. Companies laddered all sides of the building, which helped to provide ease of access to quick egress.
Crews were heavily engaged in operations, due to this fire being well involved. Crews were able to place the fire under control utilizing the 3 attack lines with excellent team work. New Brunswick and North Brunswick Crews checked for extension, as well as began to overhaul the fire. All interior crews were swapped out and sent to rehab, where fresh manpower assisted in the remainder of checking for hotspots and complete extinguishment of the fire.
Total operational time was approximately 3 hrs. and 30 mins. The scene was turned over to Franklin Twp. Fire Prevention and remains under investigation at this time.
Additional units on the scene were Car 274, Engine 27, Air 27, Utility 27, Utility 272 and the rehab trailer, Car 252, and Engine 251.
Thank you to Bound Brook, Finderne, Middlebush and Elizabeth Avenue for providing standby coverage for Fire District #3.